US mass shootings becoming more frequent – and more deadly
by Mona Chalabi, 12/2/15, cross-posted from The Guardian


The shooting in San Bernardino with 14 victims has added to the growing number over the past three decades, but support for gun control has fallen 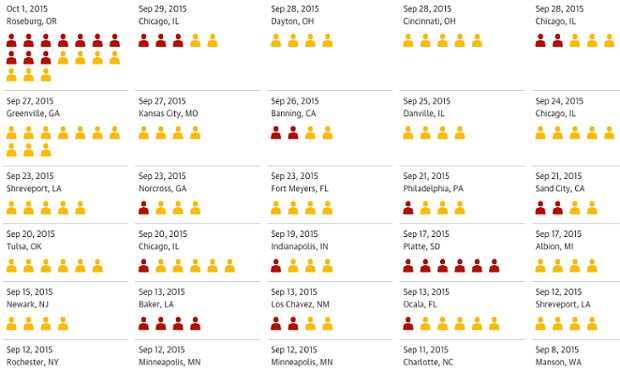 Mass shootings have become an everyday occurrence in the US. Photograph: The Guardian

The shooting in San Bernardino with 14 victims has added to the growing number of mass shootings in the US.
The San Bernardino sheriff’s department confirmed 14 people are dead in Wednesday’s shooting. That would make this the worst killing since 26 people were killed at Sandy Hook Elementary school in 2012 and the sixth deadliest mass shooting since 1982, according to a database built by Mother Jones.


The number of victims has also risen. In 2014, 383 people were killed in mass shootings and 1,239 were injured. So far this year, 447 individuals have been killed and 1,292 injured.
Official numbers can be found from a report published by the FBI last year, which studied active shooting situations (though their definition of a mass shooting is broader and includes all incidents where “an individual actively engaged in killing or attempting to kill people in a confined and populated area”). The FBI figures point to a rise since 2000 both in the number of incidents and the number of casualties.