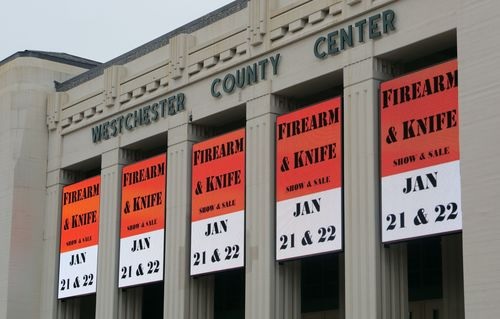 On Tuesday, January 24 at 7:00 PM, there will be a public hearing on the proposed Gun Show Ban legislation, and the Model Gun Show Procedures bill proposed by the Republican Caucus.

The hearing will take place at:

The meeting will start at 7:00 PM, but people may sign up to speak, starting at 6:15 PM.   Speakers may testify for up to 3 minutes, and/or submit a written statement.

Please RSVP to Prevent Gun Violence-Westchester, to let us know you're coming.  We'll keep you posted on any new developments.   Click here for Draft Talking Points for the hearing.

County Executive Astorino is expected to VETO the recently passed bill to ban gun shows at the Westchester County Center this week.

Unfortunately, this means that the January 21-22 Gun Show is expected to take place as originally scheduled, despite massive public opposition.

The veto will probably come on Thursday or Friday of this week.  But we aren't giving up!!   PLEASE URGE Republican legislators to join the majority of their colleagues to support the Gun Show Ban.   We need to find at least 3 Republican Legislators who voted NO on the ban, to reconsider and vote YES.  (Scroll down for the list of legislators to contact.)

Our primary message at the January 24 Public Hearing is the same.  We support the Ban on Gun Shows at the County Center and on all county-owned property, and we want the Board of Legislators to ACT NOW to override Astorino's veto.

Click here for Draft Talking Points for the hearing.

Next Tuesday's hearing provides an opportunity for citizens and residents to express their concerns about the continued scheduling of Gun Shows at the County Center.  Unlike the January 9 hearing, in theory, there is no limit to the number of speakers, so everyone who attends can sign up and be heard.

In addition to speaking about the Gun Show Ban, speakers can address the proposed bill to adopt Model Gun Show Procedures for all future gun shows held in Westchester County, whether on public or private property.  The Model Gun Show Procedures were developed by New York Attorney General Eric Schneiderman, and so far more than 30 gun show promoters who hold gun shows in New York state and the Northeast have adopted them.

In addition, speakers may address other issues about gun violence in our commuities, and the County Board of Legislators' responsibility to address them.   If you have a concern, please come to the hearing and share it.


POLITELY URGE THEM TO RECONSIDER,
AND VOTE WITH THE MAJORITY
TO OVERRIDE THE COUNTY EXECUTIVE'S VETO!!

Click the links below to be transferred directly to your legislator's page.

If you don't know which county legislator represents you, click here and enter your street address.

Message (cut and paste):
Please pass legislation now to ban all Gun Shows at the Westchester County Center and all county property.   As a Westchester County resident and taxpayer, I strongly oppose the use of our county-owned buildings and grounds to facilitate private sales of firearms.

Add your own comments!
Posted by Chuck Bell at 10:59 AM