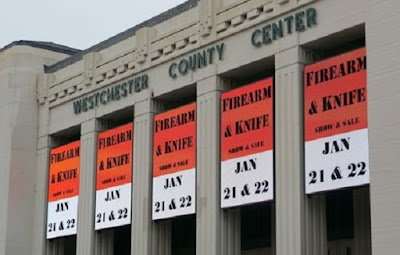 The next and most exciting phase of our campaign to ban Gun Shows at Westchester County Center is now underway.

We are calling on the 8 legislators who voted against the ban to please change their vote, and vote with the majority to Override County Executive Astorino's Veto of the Gun Show Ban.

As you may remember, on January 9, the Westchester County Board of Legislators voted to approve the Gun Show Ban, by a vote of 9-8.   The bill was sent to County Executive Rob Astorino for his signature.

But unfortunately, Astorino vetoed the bill on January 19, and the Gun Show went ahead as scheduled on January 21-22.  More Gun Shows may be held later in the year, subject to future scheduling by Astorino.

Therefore, we need to make Gun Shows a front-of-mind, visible issue that County Legislators must address in their local districts.  To do this, we need citizens and residents to contact legislators, and mobilize support from friends, neighbors and community groups in each district.   This type of citizen-to-citizen activism and grassroots lobbying doesn't happen very often in Westchester County. But this is an issue that parents, teachers, students and clergy all understand, and care deeply about.

The Journal News said, oh, this is just a symbolic vote.  The 9-8 victory in passing the Gun Show Ban is not a big deal.   Astorino will veto the bill.  The opponents of Gun Shows don't have the votes to override.  But, in a democracy, the people rule.  If we get people active and organized, we can win this campaign.

Veto Override Flyers Targeting Individual Legislators:   We are creating individual flyers for each district.   The flyer tells you which legislator to call and email to support the Gun Show Ban, and how to contact them.


Please distribute our flyers whenever and whereever you can.   Post them in libraries, grocery stores and laundromats.  Go leafleting at your local Metro-North station or grocery store.   Distribute them in PTAs, religious and community organizations.  Volunteer to staff a literature table on Gun Violence Prevention at village or town events.   Hold a screening of Gun Violence Prevention video at your community organization.  The goal is to get the word out widely, and and to get our neighbors and friends to take action now, by contacting the legislators to urge them to change their vote.

County-Wide Vigils:   We also plan to organize one or more evenings of simultaneous candlelight vigils in each district, to insist that the County Legislature pass the Gun Show Ban.  If you can volunteer to serve on a district committee to help organize and coordinate the vigil and other local events, please contact us at: ReduceGunViolence [at] gmail.com.

WESTCHESTER COUNTY LEGISLATORS WHO
VOTED "NO" ON THE GUN SHOW BAN ON JANUARY 9
POLITELY URGE THEM TO RECONSIDER,
AND VOTE WITH THE MAJORITY
TO OVERRIDE THE COUNTY EXECUTIVE'S VETO!!

Click the links below to be transferred directly to your legislator's page.

If you don't know which county legislator represents you, click here and enter your street address.

Message (cut and paste):
Please pass legislation now to ban all Gun Shows at the Westchester County Center and all county property.   As a Westchester County resident and taxpayer, I strongly oppose the use of our county-owned buildings and grounds to facilitate private sales of firearms.  Please vote to override County Executive Rob Astorino's Veto of the Gun Show Ban.